Check out Susan’s web show “All For Animals”! Click HERE

Susan is a native New Yorker who has been heard on the radio in the New York area since 1986.

Before joining 1010WINS in December 1998, Susan was Program/Music Director at WFAS-FM in White Plains, New York where she also served as both Midday and Evening (Love Songs) host.  Susan was a weekend personality at K-JOY 98.3 on Long Island and a freelance News Anchor for Shadow Broadcast Services, heard on WNEW-FM, WQCD and WKXW-New Jersey 101.5.

Susan also hosts the video web show “All For Animals” which supports animal rescue by offering resources to pet parents and encouraging the adoption of shelter animals, with a focus on the NY Metro area. Check it out at AllForAnimalsTV.com.

Also on camera, Susan served as anchor for the Petco Foundation’s Facebook Live broadcast from their All For Love Adoption Rally & Celebration in Union Square Park in which more than 200 animals were available for adoption. 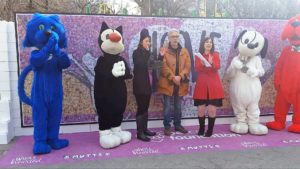 Susan is proud to have served as an emcee for gala fundraisers for Animal Care Centers of NYC and the New Rochelle Humane Society, as well as for Best Friends Animal Society’s “Strut Your Mutt”, the Tompkins Square Halloween Dog Parade,  Adoptapalooza and NYC’s Summer on the Hudson screening of the documentary Feral Love.

As an actress, Susan most recently appeared in New Ambassadors Theatre Company’s “Corona Chronicles”, a five-part episodic series of video shorts shot on Zoom.  She also performed in NATC’s 2020 Heartbroke Short Play Festival.  Susan is the Digital Media Coordinator and a board member of Break A Leg Productions Theatre Company, having performed more than two dozen times with BAL, including portraying Elisabeth Heisenberg in the world premiere of Farm Hall by David C. Cassidy at the 2014 Midtown International Theatre Festival.

BAL staged readings include The Brother (Ruth Greenglass), and The Good Doctor (in all the Marsha Mason roles!), as well as Theatrical Haiku, Boy Meets Girl, The Jealous Husband, The Philadelphia and Stay Carl, Stay, among others.  Susan is also a regular performer in the BAL/CUNY Grad Center Art & Science Series, playing historical figures in the world of science, including Rosalind Franklin in No No Nobel, Marie Curie in Pierre & Marie, Virginia Galilleo in The Starry Messenger and Jean Shockley in W=S: The Transistor Shock.

Other New York theatre includes How To Go Out On A Date In Queens at the 78th street Theatre Lab & Don’t Tell Mama, Super Eros with the Wild At Last Theatre Company (Tony winner Hugh Hysell, Director), And Miss Reardon Drinks A Little at the Impact Theater, Earth And Sky at the Pelican Studio Theatre and Picnic and Our Town at the Riant Theatre.  On TV, she played the Caterer in a scene opposite Jennifer Coolidge in the season 6 episode of Sex And The City titled “The Perfect Present”.